A Student Eating Great on a Budget 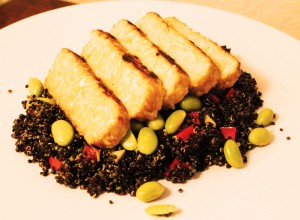 After a year in halls, I have recently moved into student accommodation in Nottingham and so far so good. Choosing who to live with was fairly easy. I have made a few good friend over the first year and it made sense to share with people who were studying similar courses to me so our timetables don’t clash too much.This was often a problem last year as there is nothing worse than hearing a party banging on ‘til 4am when you have to be up at 7 for an exam! There are 4 of us sharing a student property in Lenton, which is perfect as it is within walking distance to the city centre and an area heavily populated by students which makes it quite homely. We decided early on to split all the bills equally between us, including food and because of this we try to eat together as often as possible. This not only keeps the cost down but also means the kitchen stands a chance of looking reasonably clean if only one main meal is being cooked each evening! We take it in turns to cook, which I know sounds ridiculously well organised for a bunch of students but it really works, usually whoever is expected home first on a particular day prepares a meal for everyone else.( If I’m really honest this was Mums idea, but as far a shes concerned I am surviving on nothing more than beans on toast and vodka!)

So anyway I am certainly not any kind of master chef! And there is a bit of pressure to come up with something a bit more interesting from time to time. I’ve exhausted all the usual stuff and have been hunting round for inspiration for cheap,easy and reasonably healthy game recipes. I saw an advert on TV for that ‘change for life’ thing the government are promoting, it’s basically about getting families to live healthier lifestyles but the bit that caught my attention was they mentioned you get money off vouchers if you sign up. Well obviously living in student accommodation and being skint I was not going to turn that down so I downloaded the app and signed up right away. Well the money off vouchers weren’t that great, but some of the recipes on the app are really good! Simple recipes that are cheap, healthy and most importantly pretty tasty too!

The first one I tried was a bean stew. The portions are a bit skinny I think. Basically just make the sauce and serve with any vegetables you like, I went for broccoli and peas. Everyone really enjoyed this meal and it was really easy to prepare and filling to so this is one I will definitely be using again.

I’ve also tried one of the soups made from red peppers, carrots, lentils,  veg stock and ginger this was really good and took no time at all to make, went down really well with a crusty french stick…yummy.

There are quite a few good recipes on the app that I am going to try out over the next few weeks. It’s nice to be eating something different for a change and although it is kinda against all student laws it is good to know they are also quite healthy too. Saying that no student property would be complete without a pile of empty pizza boxes in the corner of the kitchen so tonight we are having a night of from the cooking and having takeaway……well why not?!