How Fleas And Ticks Affect Pet And Human Health

flea and tick
10 years ago
by BerryRipe 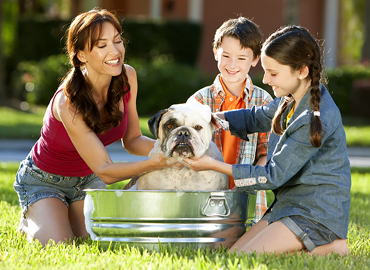 One of the most distressing problems to both an animal owner and his or her pet is a flea or tick infestation. If you have a furry friend, then you are aware that fleas and ticks not only affect dogs and cats. The presence of such ectoparasites in your home can also cause you and your family a few health problems. But there are ways to prevent an infestation. Begin by understanding how fleas and ticks survive so that you’ll be able to employ proper preventive measures.

Where Did My Pet Get Fleas and Ticks?

You probably won’t even notice that your pet is already suffering from a flea infestation because you’d seldom see them scratching at first. But as time goes by, the insects that are living in your pet’s fur multiply. Soon, you’ll not only notice excessive scratching, but you’ll also see skin irritation. Furthermore, such insects cannot be contained. If you allow your pet to roam inside your house, then the fleas and ticks will find their way to other food sources, which will be you and your family.

So, how did your beloved cuddly companion get infected? It’s actually quite easy for your pet to get fleas or ticks. For one, stray dogs or cats easily spread these bloodsucking insects. Other wild animals, such as raccoons, which just passed by your neighborhood can distribute the eggs of such ectoparasites too. Once the eggs hatch, the insects will just be waiting to jump on your canine or feline companion as it frolics in your yard. Ticks also crawl up on shrubs or grass so that it’ll be easier for them to leap onto a possible host.

Flea and Tick Effects on Animals

When ticks and fleas feed on animals, they inject foreign substances that cause skin irritation. So, it’s very common for animals to experience skin irritation. Flea allergy is a more serious condition wherein the infected animal bites and scratches until its skin becomes raw and its hair falls off. Pets can also get tapeworms and other dangerous conditions from such bloodsucking insects, such as canine anaplasmosis, canine hepatozoonosis, as well as anemia. Other tick-borne diseases that can severely affect humans, such as Lyme disease, babesiosis, and ehrlichiosis, can also be fatal to animals. But not all disease-causing organisms affect dogs and cats the same way. For instance, cats don’t get Lyme disease but they can contract tularemia. Hence, once you notice fleas and ticks on your domestic furry companions, act immediately to get rid of the pests. Also, visit your vet if you believe that your animal is sick because of a pest infestation.

Flea and Tick Effects on People

Just like bed bugs, fleas can transmit pathogens that cause tapeworms, murine typhus, cat scratch fever (bartonella henselae), and also the rare but serious bubonic plague. As for ticks, there are different species that transmit organisms that cause Lyme disease, Rocky Mountain spotted fever, and tularemia, to name a few. The most common condition that people experience from fleas and ticks is skin irritation. The bite of such creatures can be extremely itchy and overly scratching the affected area can injure the skin. Once the skin is injured, it’s easier for other organisms to cause infection.